An American Pulitzer Prize-winning playwright, actress, novelist, and journalist.  She is today recognized as a pioneering feminist writer and America's first important modern female playwright. Her one-act play Trifles (1916) is frequently cited as one of the greatest works of American theater, though she remains, according to Britain's leading theatre critic Michael Billington, "American drama's best kept secret."

The Glory of the Conquered: The Story of a Great Love (1909)-
Karl and Ernestine Hubers are quite different in interest and temperament, but their whirlwind courtship and happy marriage prove to the world that they are mature and happy people capable of handling their diverse personalities. Karl, a research professor at the University of Chicago, and Ernestine, a talented artist, pursue personal interests until the time when Karl is blinded by the specimens with which he is working. The loss of his sight drives him into a state of deep depression which Ernestine feels can be alleviated only by his return to the laboratory which he loves. To that end, she gives up her painting to spend untold hours at the university studying his work and the background writing in the field so that, with her assistance, he can go on with his experiments. Karl's death at the moment when Ernestine at last feels competent to work with him comes as a terrible shock to her, but she begins to restructure her life around her work in the same manner that she had earlier built her life around Karl's. The Glory of the Conquered is Susan Glaspell's first novel, bringing her instantaneous success. It has its faults--the nature of Karl's work is vague, his illness is undefined, and the tugs on the heartstrings are wearying. But what the author lacks in medical knowledge and terminology she makes up in her presentation of the intellectual life at the University of Chicago around 1900; and the sentimentality can be overlooked for the goodly portions of beauty in style and imagination in plot which she so adequately displays.
The Visioning (1911)-
Katie Jones, living on an army post in the Mississippi River valley with her officer brother, takes her regimented, carefree life for granted until she foils a young woman's suicide attempt, then begins to probe the girl's psyche for motives. As the girl's mental state improves, she tells Katie of her past life in Centralia and Chicago, reveals the reason for her despondency, and together the two find a greater awareness of the meaning of life. The life style as described in The Visioning is unconventional and exciting for 1910, but seems pretty tepid by today's standards; and the philosophies which the two girls construct have appeared before and since in stories penned by romantic idealists. Still, the story is pleasant and offers a different concept of middle western life although vague references to locale are annoying. 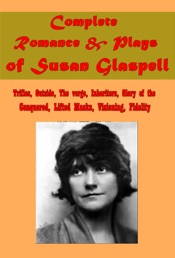