This book is filled with revolting rhymes.
(Be warned: It's no ordinary Once upon a time).

There's poor Cindy whose heart was torn to shreds, because her Prince, he chops off heads!

Snow White's dwarfs although awfully nice, are guilty of one shocking vice . . .

And what becomes of Goldilocks, that nasty thieving little louse, when she goes sneaking around the three bear's house . . .

Listen to REVOLTING RHYMES and other Roald Dahl audiobooks read by some very famous voices, including Kate Winslet, David Walliams and Steven Fry - plus there are added squelchy soundeffects from Pinewood Studios!

Look out for new Roald Dahl apps in the App store and Google Play- including the disgusting TWIT OR MISS! inspired by the revolting Twits. 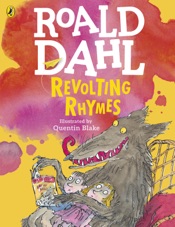