Secrets of the Santina Royals!

Heiress Angelina Carpenter chose freedom when she fled a marriage to Sheikh Taj Ahmad. Now working as a nanny, Angelina runs straight into him! And the ruthless sheikh has no intention of letting his runaway bride get away again…

*
Santina's rebellious princess Sophia was outraged at the announcement of an arranged marriage for her and boldly stowed away on the Maharaja of Naipur's private jet! But did the charismatic maharaja and Sophia spend a wild night together before their arrival in Mumbai?

*
Ella Jackson caused a stir at her sister's engagement party when she tossed a glass of vintage champagne over Sheikh Hassan Al Abbas. What happened later is unknown but Miss Jackson was seen leaving the Sheikh's opulent suite the morning after the party…and is now pregnant! 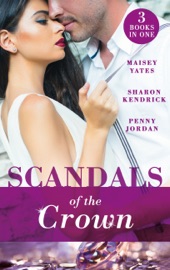