When demons threaten London, even ladies must answer the call…

Lord Gabriel Thurston returns home from war to find his fiancée much changed. She's grown from a sweet girl into a mysterious woman who guards her dark secrets well. When he sees her sneaking away from a ball, he's convinced it's for a lover's rendezvous. Following her to London's slums, Gabriel watches in horror as his fiancée ruthlessly slays a man.

Lady Belinda Clayton's only concern was her dress for the next ball—until demons nearly killed her, and a group of Demon Hunters saved her life. Now, a lady by day, and a demon hunter by night, she knows where her duty lies. Ending her betrothal is the best way to protect Gabriel from death at a demon's hands.

Gabriel soon realizes, like him, Belinda has been fighting for her country. He joins in the fight, determined to show her that their love can endure—even at the gates of Hell. 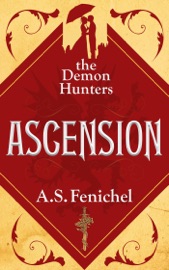