At a time when a lasting peace between the Palestinians and the Israelis seems virtually unattainable, understanding the roots of their conflict is an essential step in restoring hope to the region. In The Iron Cage, Rashid Khalidi, one of the most respected historians and political observers of the Middle East, homes in on Palestinian politics and history. By drawing on a wealth of experience and scholarship, Khalidi provides a lucid context for the realities on the ground today, a context that has been, until now, notably lacking in our discourse.

The story of the Palestinian search to establish a state begins in the mandate period immediately following the breakup of the Ottoman Empire, the era of British control, when fledgling Arab states were established by the colonial powers with assurances of eventual independence. Mandatory Palestine was a place of real promise, with unusually high literacy rates and a relatively advanced economy. But the British had already begun to construct an iron cage to hem in the Palestinians, and the Palestinian leadership made a series of errors that would eventually prove crippling to their dream of independence.

The Palestinians' struggle intensified in the stretch before and after World War II, when colonial control of the region became increasingly unpopular, population shifts began with heavy Jewish immigration from Eastern Europe, and power began to devolve to the United States. In this crucial period, Palestinian leaders continued to run up against the walls of the ever-constricting iron cage. They proved unable to achieve their long-cherished goal of establishing an independent state—a critical failure that set a course for the decades that followed, right through the eras of the Palestinian Liberation Organization, the Palestinian Authority, and Hamas. Rashid Khalidi's engrossing narrative of this torturous history offers much-needed perspective for anyone concerned about peace in the Middle East. 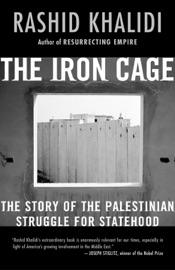