From one of the lone survivors of the Treblinka concentration camp comes a devastating memoir of the Holocaust in the tradition of Primo Levi’s Survival in Auschwitz.

Why did some live while so many others perished? Tiny children, old men, beautiful girls—in the gas chambers of Treblinka, all were equal. A central cog in the wheel of Adolf Hitler’s Final Solution, the fires of Treblinka were kept burning night and day.

Chil Rajchman was twenty-eight when he arrived at Treblinka in 1942. At the extermination camp, he was forced to work as a “barber,” shaving the heads of victims, and a “dentist,” pulling gold teeth from corpses. But he escaped eleven months later and survived to tell the shocking and heartbreaking tale of his experience—and of those who didn’t make it out alive.

Elie Wiesel calls The Last Jew of Treblinka “an important, heart-rending contribution to our search for truth.” Poignant and powerful, this memoir provides the only survivors’ record of the horrifying Polish extermination camp. Originally written in Yiddish in 1945, without hope or agenda other than to bear witness, Rajchman’s story shows that remembering is sometimes the bravest and most painful act of all. 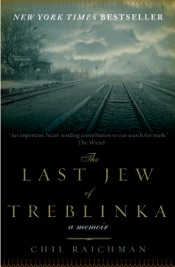