The last volume closed with an account of Colonel Plumer’s desperate effort to relieve Mafeking on the 31st of March. On that unlucky day events of a tragic, if heroical, nature were taking place elsewhere. These have now to be chronicled. On the 18th of March a force was moved out under the command of Colonel Broadwood to the east of Bloemfontein. The troops were sent to garrison Thabanchu, to issue proclamations, and to contribute to the pacification of the outlying districts. They were also to secure a valuable consignment of flour from the Leeuw Mills. The enemy was prowling about, and two commandos hovered north of the small detached post at the mills. Reinforcements were prayed for, and a strong patrol was sent off for the protection of the post, or to cover its withdrawal in the event of attack. Meanwhile the enemy was “lying low,” as the phrase is. Whereupon Colonel Pilcher pushed on to Ladybrand, made a prisoner of the Landdrost, but, hearing of the advance of an overwhelming number of the foe, retired with all promptness to Thabanchu. The Boers, with the mobility characteristic of them, were gathering together their numbers, determining if possible to prevent any onward move of the forces, and bent at all costs on securing for their own comfort and convenience the southern corner of the Free State, whence the provender and forage of the future might be expected to come. Without this portion of the grain country to fall back on, they knew their activities would be crippled indeed.

In consequence, therefore, of the close proximity of these Federal hordes, Colonel Broadwood made an application to head-quarters for reinforcements, and decided to remove from Thabanchu. On Friday the 30th he marched to Bloemfontein Waterworks, south of the Modder. His force consisted of the 2nd Cavalry Brigade (10th Hussars and the composite regiment of Household Cavalry), “Q,” “T,” and “U” Batteries R.H.A. (formed into two six-gun batteries, “Q” and “U”), Rimington’s Scouts, Roberts’s Horse, Queensland and Burma Mounted Infantry. The baggage crossed the river, and outspanned the same evening. On the following morning at 2 A.M. the force, having fought a rearguard action throughout the night, arrived in safety at Sanna’s Post. Here for a short time they bivouacked, and here for a moment let us leave them. 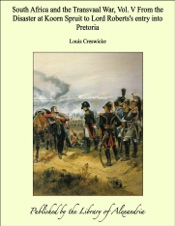