Every iBooks Edition contains new and exclusive content that you can’t find anywhere else.

When hockey phenom Billie Jo Barker returns home and decides to play in the local Friday night hockey league all hell breaks loose. Not because Billie’s talent is called into question, but because Billie is a woman. And though these are modern times some of the local guys still have a problem letting a girl into their ‘men’s club.’

Soon Billie is at the centre of a small town battle of the sexes with everyone choosing sides. Her sisters. The townsfolk. Her friends. And yet the only person whose opinion she cares about doesn’t seem to care at all. Logan Forest—the man who broke her heart when she was eighteen and the man she now shares a bench with every Friday night.

She’s got a lot to prove and though Billie Jo Barker scores on the ice, will this girl ever score with the man of her dreams?

This iBooks Edition contains an extended epilogue as well as the entire first chapter of book two in this series, Collide. 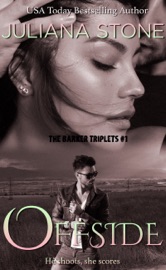