Sam Fisher must save one man’s life to save his own country.

Eccentric billionaire Igor Kasperov owns one of the most influential and successful anti-virus software companies in the world. But when the Kremlin orders him to unleash a catastrophic computer virus against the United States, he is forced to flee for his life.

Sam Fisher and Fourth Echelon are charged with finding Kasperov and presenting the American president’s offer for political asylum. Because there are others looking for Kasperov. And the only thing they will offer him is a swift death… 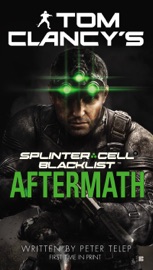