The Way is a tunnel to the multiverse, infinite possible realities throughout the universe. From its entranceway in Axis City, the space station at the center of the asteroid-starship Thistledown, one may travel to any world and any time.

Lamarckia is a world very much like Earth, but populated by shapeshifting biological forms. More than four thousand colonists have illegally used the Way to settle there, and the ruling gatekeepers fear that the interaction between humans and aliens could prove devastating to the future of both species.

Now, Olmy Ap Sennon has been sent to Lamarckia to spy on the colonists and investigate their effect on their new home. As he witnesses their struggle to survive their unforgiving environment—and each other—Olmy experiences all of the joy and heartache that comes from a life worth living, in “a stunning SF novel that extrapolates a scientifically complex future from the basic stuff of human nature” (Publishers Weekly, starred review). 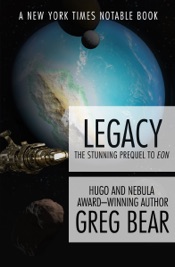