Hey. Got tics? You’re not alone. Up to one in five kids will have at least one tic at some point. Including the guy who wrote this book!

Dr. B. Duncan McKinlay, Psychologist (‘Dr. Dunc’) has Tourette Syndrome. That means he’s been living with both motor tics (movements he has a hard time stopping) and phonic tics (noises he has a hard time stopping) for most of his life. He knows firsthand how annoying, embarrassing, misunderstood, painful, and disruptive tics can be. For years, he’s been educating people all around the world by means of his presentations and website, and through appearances on television, in magazines, and on film. Now, in Nix Your Tics!, he wants to share with you a well-established, evidence-based practice* he uses to manage tic symptoms in both himself and in his patients.

The Second (E-)dition: Re-edited & revised with all-new content!
* New section: Starve that Tic!
* Interactive widgets permit completion of steps & tracking of progress from right within the book!
* New integration with web-based content, including support groups and the online, Nix Your Tics! Facebook community!
* All-new multimedia elements and summaries to enhance engagement & accessibility!
* A 2012 audio interview with Dr. Dunc has been embedded into the book, accompanied by a slideshow of pictures taken from the Life's A Twitch! website!
* Supports both landscape (iPad, iPhone, iPod touch, Mac) & portrait (iPad) orientations.
* Ages 10 & up. 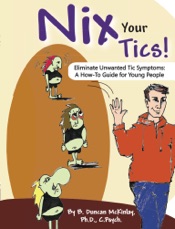